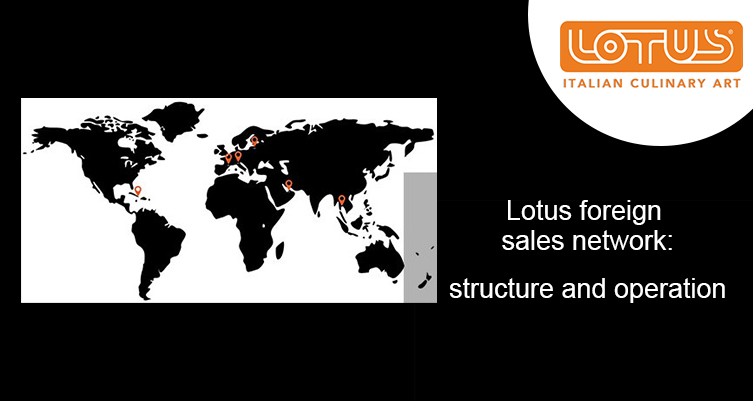 In January 2020 we started the new "Lotus Project in the World", the initiative that brought together the global family of Lotus partners with their best projects. The purpose of this initiative was to encourage the sharing of ideas for the creation of cutting-edge professional kitchens by adding to the Made in Italy of the Lotus creations the peculiarities of foreign cuisine.

To keep alive and expand this project of collaboration and business growth, the contribution of the Lotus foreign sales network was fundamental; this team is made up of commercial and technical partners who have gradually become part of the company organization chart since 1985.

Almost 40 years later, the Lotus foreign sales network is demonstrating stability and concreteness. Thanks to these characteristics, the company can now thank a well-established sales network that is ensuring continuity in the Lotus home business even beyond its national borders.

How is the Lotus foreign sales network structured?

Lotus spa can count within its organization chart of Area Managers who personally follow the different areas of the world both from the headquarters in San Vendemiano, and from their specific areas, where they take care of the presence of Lotus in different parts of the world and which give life to the widespread structure of the company outside the Italian borders.

In detail, Lotus can count on:

- an area manager in Estonia who manages the Baltic countries, the countries of the former Soviet Union and Bulgaria;

- an area manager who follows the Middle East area from Dubai;

- a representative office in Bangkok for all the countries of the Asian area;

- a representative office which follows the commercial network in France from Avignon;

- an agent in Havana for the Cuban market;

All this without counting the historic base office that manages the rest of the world and the agents’ network in Italy, made up of multi-firm agents followed directly by the commercial management.

How do the agents of the Lotus foreign sales network work?

The agents of the Lotus foreign sales network promote the work of the Italian mother company through structured partnerships, which objective is the realization of new projects and the creation of positive and lasting relationships with foreign customers. In fact, foreign agents act as a glue between the company and the customers and build partnerships with an approach that respects - and reflects - their foreign market. Each market has its own characteristics and for this reason the relationship must be managed according to these peculiarities.

The Lotus foreign sales network is made up of importers with their own network of distributors and of direct distributors for specific areas of some other countries.

These foreign salespeople do the essential job of connecting and interacting with the consultants of the hotel chains, real stakeholders for Lotus. In the most important and structured projects, they often define the brand to be recommended.

There are two main characteristics that best describe the working method that identifies the Lotus sales network in Italy and abroad: competence and enthusiasm.

Compared to competitors, Lotus sales representatives have technical skills that allow them to immediately seize the specific needs of every customer and to propose the most suitable solution.

In short, the Lotus salesman's work is not limited to mere sales, but is a real professional consultancy, which starts from acknowledging the customer's requests, including customization, and ends with the proposal of an ad hoc solution for him.

The technical skills are what distinguishes the work of our "agents / consultants" and is one of the reasons why the execution process of each individual project becomes extremely concrete and customized to the real needs of customers. The result is an important and active role in every order and an enthusiastic and performing contribution within the Lotus structure.

Do you want to become part of the Lotus foreign sales network?

Discover the possibilities for our partners